Will Those Who Die in Jihad Go to Paradise?

You are here: Home1 / Will Those Who Die in Jihad Go to Paradise? 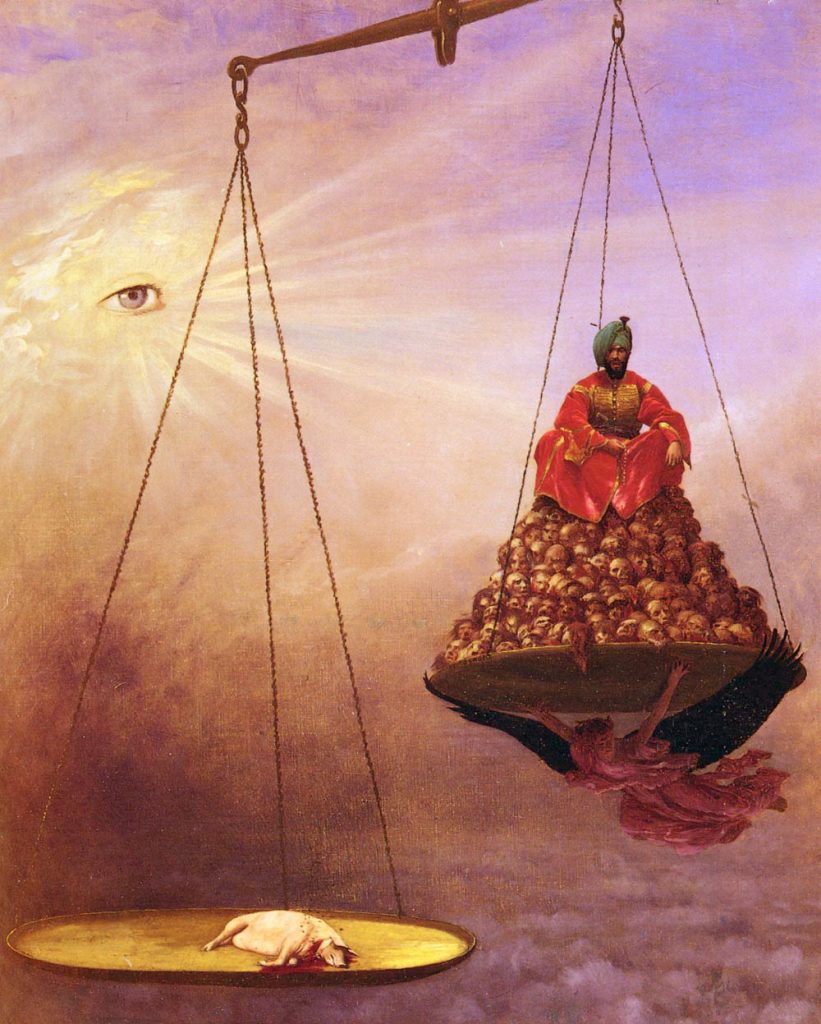 The Last Day of Judgment by Jean Leon Gerome

In March, 2004 a 16 year old mentally retarded boy heard his teacher promise him paradise along with a river of honey, wine and 72 virgins. This quiet, innocent, naive boy had been struck on the head as a child, and as a result was mentally disabled. Abdu Muhammad believed his teacher and strapped on a suicide bomb and went forward toward paradise, or so he imagined. An Israeli soldier intercepted him before he could kill himself or others. Days later another 15 year old school boy was enticed to become a suicide bomber by a religious sheik who also promised him money, paradise and virgins. In his case, he had grave doubts, and backed out with tears and trembling. This story and others like it have become increasingly common. Others, such as the al-Qaida bombers of 9-11, did not back out, but killed 3,000 people in the United States. But did they enter Paradise to enjoy a river of wine and virgins forever? Or did they meet a very different fate?

Since so many believe they will go to Paradise if the die fighting jihad, the question deserves a serious answer. For that, let us consider what God has to say about the matter, rather than appealing to human opinion or any other source. After all, He is the Judge before whom everyone must give an account:

The word “jihad” means two different things. First, in the traditional sense it means to engage in a holy struggle for the sake of Islam, either inwardly and spiritually or outwardly in war. The word also applies to violent acts against governments and others deemed to be enemies of true Islam. We will consider both as the same answer applies to both.

The answer is found when we ask another question: what does God say about how we can enter Paradise?

First of all God tells us how we cannot enter Paradise:

“Therefore no one will be declared righteous in his sight by observing the law; rather, through the law we become conscious of sin” (Romans 3:20 [in the Injil]).

God has clearly stated that we cannot gain Paradise through our own good works. Why? Because the whole human race is in a sinful condition, and an evil tree can only produce evil fruit. Therefore even our efforts to do good works cannot earn us favor with God.

“All of us have become like one who is unclean,
and all our righteous acts are like filthy rags;
we all shrivel up like a leaf,
and like the wind our sins sweep us away” (Isaiah 64:6 )

Therefore, since our own efforts cannot earn us a place in Paradise, it is clear that even dying in jihad in the classic sense cannot do so. And if trying to obey God’s law cannot gain us Paradise, how much more will violating God’s holy moral law by engaging in the second type of jihad not earn us anything of the kind:

“Anyone who hates his brother is a murderer, and you know that no murderer has eternal life in him” (1 John 3:15 [in the Injil]).

This is why the 19th century artist Gérôme depicted a man’s many killings as worth less than a dead pig in the eyes of the Holy God in the painting above. This is not only how God regards murder, but also all our sins and our unholy attempts at pleasing God. Even when we manage to do good deeds, apart from God’s grace are they not tainted by wrong motives? Sinful men by nature cannot by their own efforts please an infinitely holy God, whose standard is perfection. Deep down most of us know the good and gracious God of heaven never asks his children to commit murder and suicide. This is why the parents of the so-called martyrs weep and grieve bitterly upon learning their children have taken their own lives and the lives of innocents. Their tears testify of the truth. Those who believe their god asks them to commit mass murder need to seriously consider whether they are worshiping a false god. The creator of life forbids murder; he never commands it. Furthermore, his heaven is a spiritual, holy place, not a place where the wicked can gratify their sinful desires. Are they not also deceived in their perverse idea of heaven? Do they not also create a monstrous, blasphemous and idolatrous caricature of the creator, implying that the author of life approves of the mass murder he has forbidden?

For those contemplating waging jihad with the hope of entering paradise, know this. It is an absolute certainty that they will never enter paradise but rather face the judgment and wrath of God for ever and ever. They have been cruelly deceived.

If participating in jihad and our own good works cannot gain us Paradise, how then can we gain it? The answer is found in the character of God and in his good and gracious provision. God is not only perfectly holy and just, he is also loving and merciful. That is why he sent Isa al-Masih (Jesus Christ) into the world to become the Lamb of God and take away our sins:

“But now a righteousness from God, apart from law, has been made known, to which the Law and the Prophets testify. This righteousness from God comes through faith in Jesus Christ to all who believe. There is no difference, for all have sinned and fall short of the glory of God, and are justified freely by his grace through the redemption that came by Christ Jesus” (Romans 3:21-24 [in the Injil]).

God has given Paradise to all who will receive the gift of Isa al-Masih with faith and repentance.

For more about the Good News, please see the The Truth That Sets Us Free.

We welcome both your comments, and further conversations about these topics through the contact form.

Missionary zeal does not grow out of intellectual beliefs, nor out of theological arguments, but out of love.